Like screen shots, any filters will not be recorded or effect the content of the captured video.

Each platform is different so you may need to search around for specific help. The file captured will end in .AVI, which is a container format. Most computers may look like they are already configured to play the captures movie, but most likely they are not. The video portion of the movie is encoded with the zMotion CODEC, which allows for reasonably fast encoding of low color content.

The Win 32 Release of DOSBox includes the necessary CODEC and install scripts needed to allow Windows Media Player (or almost any other movie player in Windows). If you installed the Start Menu shortcuts simply select Install movie codec 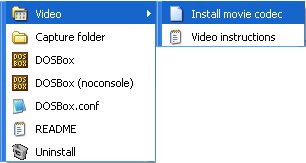