From DOSBoxWiki
Jump to navigationJump to search

The ImDisk Virtual Disk Driver is an open-source application for Windows that allows to mount image files as virtual drives in Windows. In particular, it also supports mounting floppy images as virtual floppy drives, which makes it useful for playing multi-floppy games in DOSBox, as the internal IMGMOUNT command does not support floppy image swapping. In contrast to alternative solution Virtual Floppy Drive, the ImDisk driver also works on 64-bit versions of Windows.

The driver can be installed and uninstalled without having to reboot Windows. It creates a new symbol ImDisk Virtual Disk Driver in the system control panel (users of Windows Vista and above will have to switch their control panel from category to symbol view to get the new option to show up). Using the Mount new... button, a new virtual drive can be created. By convention, you will most likely want to use A: or B: as a drive letter. Choose your floppy image file, set the device type to Floppy, and choose other options as desired. Windows will probably complain about wanting to check the freshly mounted drive for errors, which you should skip.

Once the virtual drive is mounted, you can now use the regular MOUNT command to expose it to DOSBox. For example:

to expose the virtual floppy drive B: from Windows as drive A: in DOSBox. If you need to swap disks, you can return to the ImDisk configuration window, select the existing drive and unmount it, then mount the other image to the same letter. In contrast to other workarounds for multi-disk games, this solution should always work, since games and applications see the entire floppy disk including original media label (as for all intents and purposes, even DOSBox is unaware of the fact that it is not a real, physical disk drive).

Note: When you mount two images to the same drive letter by accident, you will end up with an entry in the virtual drive table that no longer works, but you also cannot unmount (since it was already implicitly unmounted by being replaced with the new one). This entry will only disappear next time you reboot your system. This seems to be a bug in current versions (1.5.7) of the ImDisk driver. 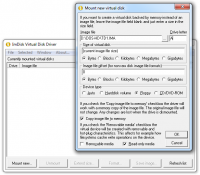